“Evidence accumulated over the past three decades shows that well-designed and well-executed programs that are founded on evidence-based principles can achieve positive health and financial outcomes.”

(This study was paid for by American Specialty Health, a successful and well-regarded company in the alternative network business that also, not surprisingly, has a wellness subsidiary.)

The study in question appeared in a recent issue of the Journal of Occupational and Environmental Medicine.

Most of these questions were originally asked by Jon Robison of Salveo Partners, in this post.

Questions for Ron Goetzel (who has not answered any relevant follow-up question asked of him about his Koop Award either, meaning now he has forfeited $2000 in honoraria)

Is it ethical to claim “no conflict of interest” in writing this article when a wellness company paid you for it and when you and most co-authors make their living in the wellness industry?

Can you explain your reasoning for listing (see below) the Koop Award-winning State of Nebraska as a “best practice wellness program” after they admitted lying about saving the lives of cancer victims who never had cancer, and after it turned out their savings figures were clinically and mathematically impossible, and after it was exposed that the state’s wellness vendor sponsors the Koop Award?

Why didn’t you disclose that literally none of these “best practice” programs (especially Nebraska’s, which deliberately waived all age-related cancer screening guidelines) follow US Preventive Services guidelines and therefore companies that follow these best practices on balance are more likely to harm their employees through overdiagnosis than benefit them?

Why do you still cite Larry Chapman’s 25%-savings-from-wellness-programs allegation even though readily available online government data below shows wellness-sensitive medical events account for only 8.4% of a typical employer’s hospital cost (about 4% of total employer spending), thus making it impossible to save 25%?

Why are you still citing Prof. Baicker’s article when she herself has backed off it three times, it’s never been replicated, and all attempts to replicate it, including the most recent attempt to replicate it (in the “American Journal of Health Promotion”), have shown the opposite and she herself says “there are very few reliable studies to confirm the costs and the benefits”?

Likewise, how can you cite the Pepsico health promotion study in Health Affairs in support of that same conclusion when that study concluded exactly the opposite: that health promotion had a negative ROI?

Guest question submitted by Dr. Jon Robison:  On p 931 you say that the RAND study found weight reduction — of course, only on active participants, excluding dropouts and non-participants — that was “clinically meaningful” and “long-lasting.”  How does that square with this slide from that very same RAND study showing exactly the opposite? (Since this chart may be difficult to read,we’ll highlight the key finding, which was that by the 4th year the average active participant had sustained weight loss of only a few ounces.) 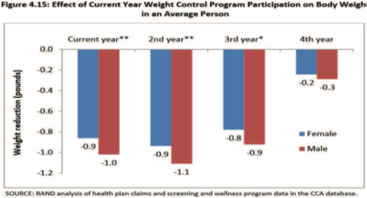