Home » screenings » Are you smarter than a wellness vendor? Take the Interactive Health IQ test and find out.

Are you smarter than a wellness vendor? Take the Interactive Health IQ test and find out.

I’ve raised the bar for getting “profiled” on this site. Life is too short to simply highlight every wellness outfit that tests inappropriately and then lies about their outcomes.

Nor can you get on this list simply with bold proclamations of fatuous statements, like Interactive Health does:

Hey, Interactive Health, we get that you don’t understand statistics in general, based on the mind-boggling excuses your consultant offered about your completely invalid savings report (“Al, the [massive] savings on Page 4 have nothing to do with the [trivial] risk reduction on Page 9. It’s a completely separate analysis.”).

Even so, maybe you can find a smart person to explain this particular statistic to you:

Here are some other differences between the two activities: Chairs don’t carry excise taxes or warning labels. If you’re under 18, you can buy a chair without a fake ID.  Workers are allowed to sit inside the building. Chairs don’t make you clothes smell, cause lung cancer or dangle from the lips of gunslingers in old John Ford westerns. Sitters aren’t assessed health insurance penalties. Your Match date will not feel misled if he or she catches you taking a seat, even if your profile didn’t disclose that you sit.

Sitting isn’t the “new smoking.” Opioids are the “new smoking.” But since you don’t help employees understand the risks of opioid addiction, it’s probably because you don’t understand these risks yourselves. Quizzify has produced a painkiller/pain reliever awareness quiz that you might benefit from. Welcome to 2016. THIS is what’s harming and even killing employees, not sitting.

Which of these images is most unlike the others?

No, these days to get into this column, you need to soar above and beyond ordinary wellness vendor stupidity and dishonesty, because Wellsteps has totally raised the bar…and yet Interactive Health has cleared it.

I was recently screened by Interactive Health.  They were supposed to send me a standard summary writeup, which I asked for repeatedly but never received.  Instead, weeks later, their lab sent me a lab report, with no interpretation. There are one of three explanations for this:

By process of elimination, I originally landed on #3.  Quite flattering really. I’d make a few observations.

First, I specifically asked them, in accordance with USPSTF guidelines, not to measure my PSA. They interpreted that — as you can see from the top of that page reproduced at the very end — as a request specifically to measure my PSA. (It is on Page 2 of the report, which I can’t put my hands on right this very moment. However, the Wellness Ignorati, who still think it predicts cancer, will be disappointed to learn that it was quite low.)

Second, the glucose is slightly high because some very generous folks had just treated me to a large and delicious breakfast. A classic false-positive, the type of reading that makes wellness vendors’ hearts go all aflutter, because then they can do a followup reading and show that they improved the outcome, after it improves on its own.  Interactive Health’s lab report was completely unhelpful on this high reading. No advice offered.

Third, Interactive Health shattered the record, previously shared by Total Wellness and Star Wellness, for most USPSTF non-recommended blood tests. I don’t know what half these things are, which means neither does Interactive Health. (Total Wellness might win a second-place tiebreaker because they would still be testing for ovarian cancer — it’s still advertised on their website —  except that the only company that makes the test has pulled it from the market following FDA warnings not to use it. Hopefully, Total Wellness stockpiled some assays ahead of the recall, like Elaine did with the sponges.)

Interactive Health also tested me for calf tightness, as I mentioned in an earlier blog. It turns out my calves are tight, and right on-site they loosened them. I could feel my productivity soaring…until the left one went into spasm that night. Still, loose calves are a useful trait for some jobs, such as first baseman. 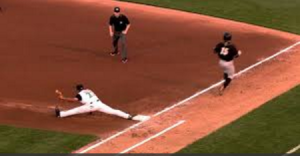 Interactive Health may have also just assumed that because they don’t like me, no one else in the industry does either.  That’s actually a fairly accurate assumption, one I am quite proud of given the integrity of most of them, with their trade association, the Health Enhancement Research Organization, leading by example in the pants-on-fire department. Indeed a good rule of thumb to determine if a wellness vendor is honest is to ask them what they think of me.

Nonetheless, I was able to find someone who was screened at a different screening and said he received an actual wellness outcomes report from these people, someone who likes me well enough to send it to me. Coincidentally, this individual had been urging me to post on Interactive Health for quite some time.  I figured, cool, I could see what a real report from Interactive Health looks like, the kind that changes employee behavior enough to explain their whopping savings claims of $54,000 for each employee who reduced a risk factor.

No such luck. He sent me exactly the same lab printout that they sent me. Only he hadn’t lost the second page, so I could count the total:  43 lab values.  “Knowing your numbers” could be a full-time job. One would think they had covered all the risk factors with all those lab values, but, curiously, the guy said his blood pressure was quite high, and they missed that altogether.

Hmm…how come he got the same completely unhelpful report I did? Did Interactive Health view my linkedin profile — as their executives are wont to do on a regular basis bordering on the obsessive –and decide that it wasn’t safe sending any of my connections their typical employee printout, on the theory that if I’m not stupid, neither are most of my connections?  If so, that would be their second fairly accurate assumption.

The only other explanation is that everyone receives the same unadorned lab report, full of letters and numbers and signifying nothing, at least to the average person without a PhD in biochemistry. My feelings were shattered. I wasn’t special. Do they send everyone else incomprehensible lab reports with 43 different numbers in them along with assortments of letters most people would associate with Scrabble…and no interpretations or advice?

Whether incompetence or botched coverup, the explanation itself remains a mystery. Nonetheless here are a few numbers and letters from his report.

How is anyone supposed to make any sense out of this? Most employees would think a “negative risk factor” is a bad thing,” as in “telling the truth is a negative risk factor for the profitability of wellness companies, which is why most of them never do it.” And what does “VLDLCH” mean and why isn’t it reported?  Still no interpretations.

And then of course there is the PSA test. If you don’t speak up — or even if you do speak up, as I learned — they’ll do one on you, even though the USPSTF rates it “D”, not to mention that the actual inventor of the test says the test is “inaccurate and a waste of money.”  My friend’s PSA result is listed at the bottom of this apparently random number and letter generator…

And, yes, finally, an interpretation!

“Values obtained with different assay methods or kits cannot be used interchangeably. Results cannot be interpreted as absolute evidence of the presence or absence of malignant disease.”

In other words, the interpretation is that this test doesn’t explain anything, so we recommend ignoring the result.

It would have been even more helpful for them to recommend ignoring Interactive Health altogether– the calves, the chairs, the cigarettes, the AST and ALT, and, to be discussed in a future posting, the fabricated outcomes report.

Here is the entire first page of my own results, so that you know we are not taking this out of context…

By whynobodybelievesthenumbers in screenings, Uncategorized on September 16, 2016.
← More employees weigh in on Slate’s wellness expose Let’s meet in person at the Employee Healthcare and Benefits Congress next weekend →