An apology for my previous dismissive statements made publicly on Linkedin

I had been quite adamant in the previous post that this meta-analysis was likely just a gold-plated package of garbage case studies. I compared it to packaging subprime home loans into AAA-rated collateralized mortgage obligations (CMO).

That was before I looked at the individual studies comprising this meta-analysis. I realize now that comparing the Harvard Study to the CMO scam was unfair. So I owe an apology to Bear Stearns, Lehman Brothers, and Countrywide.

Next, I apologize for pointing out that Ron Goetzel, as recently as last week, is still quoting this very same thoroughly discredited 7-year-old study, as well as many other outdated analyses. For example, he insists on continuing to quote the New York Times economists’ September 2014 analysis that wellness programs “generally” don’t work, even though they subsequently made their conclusion much clearer: “We’ve said it before, many times and in many ways: workplace wellness programs don’t save money.” They then specifically criticized Mr. Goetzel’s own methodology (“industry studies based on study designs that cannot produce valid causal estimates”). 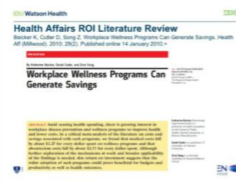 Now that I’ve checked off the usual Wellsteps-and-Goetzel-integrity boxes, it’s time to step out of character and seriously apologize. Here’s what I did that I really do need to apologize for:  not cutting wellness professionals enough slack on giving them enough time to learn what took me several years to learn about wellness losing money.

I was once guilty myself of believing this 3-to-1 ROI nonsense, specifically about disease management (DM).  Why DM in particular? I had some ego wrapped up in it because I am actually credited with inventing DM. Really.  Just google on “invented disease management.” Whether or not I did (and plenty of others could share the credit), I was not just drinking the DM Kool-Aid. I was mixing it up and selling it to others.

Then, 10-12 years ago, a few people told me none of the DM savings numbers added up. I didn’t believe them. I thought it was sour grapes because they missed the boat.

True, I had enrolled a few of my own extended family members and friends into DM programs. Vendors were more than happy to offer me their best nurses, VIP treatment, you name it. Yet no one I referred thought these free programs were even worth a second free phone call.

In my worldview, the lucky recipients of these calls would respond: “You’re right. I should be taking my pills. Hey, thanks. I never would have thought of that on my own. And I was just about to have a heart attack, so you saved a ton of money.”

Yes, I realize this made no sense. Yet I never questioned my own findings. Basically, I ignored the warning signs about DM’s sketchy economics for years.  When I finally had the epiphany, it got quite the headline:

A Founding Father of Disease Management Astonishingly Declares: “My Kid Is Ugly.”

Once I questioned my own figures, the rest because immediately obvious to me — one after another after another, sets of numbers in this field simply did not add up. Wellness was a far worse offender than DM, which does appear to roughly break even or better.  No surprise about wellness. Screening costs about 10 times as much as DM and whereas people who qualify for DM are already well down the slope to infirmity, screens are performed mostly on healthy employees, who can’t generate any savings. (We of course support screenings according to guidelines, for the health of employees rather than an ROI. But most vendors ignore guidelines and screen the stuffing out of employees.)

Still, it had taken me years to have the initial epiphany…and yet now I was quite curt and dismissive with other people who didn’t immediately get it, and were defensive in support of their lifelong assumption.  I was basically saying to others in the field: “You know all those savings claims? Total malarkey.  Prying, poking and prodding doesn’t save any money.”  I’d expect everyone else to get this right away.  When they didn’t, I was not gracious with them in many cases.

Over time, a large number of folks have come around. They did it at their own speed, same as I did.  Take WELCOA, for example. They were among the worst (and God bless ’em, funniest) offenders…and yet now you won’t find an organization more committed to getting wellness right, helping employees, and being honest than WELCOA. (In their case, a night-and-day change of leadership helped.)  I’m not just saying this–I’m walking the walk. Quizzify is joining WELCOA’s Premier Provider Network for 2017, joining vendors I have a lot of respect for, like It Starts with Me, Populytics, and SelfHelpWorks. The first two, also like Quizzify, are validated by the Validation Institute.

Making good on the apology

A good apology comes with an offer to make it up. So if you feel like I dissed you prematurely, while you were learning wellness economics on your own, you can have one of:

By whynobodybelievesthenumbers in Uncategorized on December 5, 2016.
← Wellsteps Arithmetic for Dummies Oops, they did it again. Wellsteps stumbles on integrity one more time. →