Because I didn’t mention any names, I published this one on the Corporate Health and Wellness Association blog. So you’ll have to click through. SPOILER ALERT: the bad news is that there are a boatload of things — 10, to be exact — that wellness vendors don’t know about BMI.

The good news is, there some things wellness vendors do know about BMI, like how to spell it.  This is a big accomplishment, because spelling is right up there — along with arithmetic, integrity, behavior change, and of course wellness itself — on the list of things that most befuddle wellness vendors. We’ve chronicled many examples, such as Wellsteps’ Steve Aldana calling award-winning journalist Sharon Begley a “lier.”

Health News Review just podcasted a wellness “debate.”  I put “debate” in quotes because the other side — the Health Enhancement Research Organization — refused to participate, according to the moderator.  The strategy of the Wellness Ignorati is to avoid actually telling anyone what they do, on the theory that the more people who know what they do, the more likely they are not to be able to get away with it any more.

It’s a brilliant strategy, because transparency is one of their five worst nightmares, the other four being facts, data, outcomes, integrity, and me.

The United States Preventive Services Task Force (USPSTF) just announced that for men aged 55 to 69, the Prostate-Specific Antigen (PSA) test grade is improving from a “D” to a “C.”  Needless to say the media overhyped this ever so slight grade inflation, with headlines like: USPSTF Could Drop Its Opposite to Routine Prostate Screening.  Reading beyond the headlines reveals not that you should run out and get your prostate screened. Rather, you should talk to your doctor about it.  Hardly a ringing endorsement by USPSTF, and probably only reflects what is already happening during checkups.

Even so, we looked at the exact same data the USPSTF is looking at…and we still don’t want to be screened:

If 1000 men have the PSA test, 240 will have a positive results, and 100 will have a positive biopsy which shows cancer (but 20-59% of these will be cancer that does not grow, spread or harm the individual). Of the 100 with a positive biopsy, 80 will choose treatment (surgery or radiotherapy), and 60 will suffer serious complications (including incontinence and impotence), with the net results that 3 men (out of the initial 1000) will avoid metastatic disease and 1-2 men will avoid prostate cancer death.

Surgery? Incontinence? Impotence?  I’m onto Wife #2 (#3 if you count the one who died…), and without getting into TMI here, the whole point of having a Wife #2 seems to be at variance with this USPSTF recommendation.

But let’s keep going. One or two men (of this 1000) will avoid prostate cancer death. Since there are about 26,000,000 men in that age cohort, it seems like the benefits of PSA testing would be high. Let’s take the low, conservative estimate that 1-in-1000 will be saved. That’s 26,000 lives saved through the PSA test.  Not bad, I must admit.

But then I do that thing which wellness vendors hate — a plausibility test. Turns out that annually only 26,000 men die of prostate cancer to begin with.  Presumably some number of them — let’s say 11,000, yielding 15,000 —  are not in the 55-69 year-old age category. Unless, then, that prostate test is better than perfect, something is amiss.  It wouldn’t be possible to save more than 15,000 lives.

Or for those of you who prefer visual learning, squint really hard: 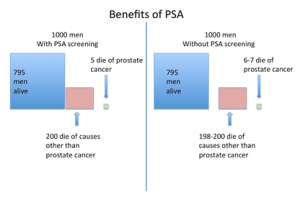 So, yes, I will take the USPSTF recommendation to “talk to my doctor,” and tell her to please leave my prostate alone or I’ll find another doctor.

They just reposted this article,with the title “A Wellness Program Everyone Can Love.”  Heck, if I can love a program, so can anybody else, right?

Spread the word…wellness is ba-ack.

Wellness 3.0: A Wellness Program even Al Lewis could love

This is not an April Fool’s joke.  Wellness 3.0 — the 401W Savings Plan — solves the major problems of wellness:

It has many other attributes as well, as the article shows. Cheating would no longer be an issue because no one would need to cheat. No PHI, meaning no HIPAA issues. No EEOC concerns, not that the EEOC cares about employees any more.  And retention should increase.