Doctor, Doctor, Give Me the News: Ron Goetzel’s latest sleight-of-hand

Looks like, to paraphrase the immortal words of the great philosopher Robert Palmer, he has a bad case of lying to you.

What has he doctored this time, you might ask?

More like, what has he re-doctored. Longtime TSW fans will recognize the first part of this posting, but stick with it. There is a sequel.

This slide was re-presented many times, often in a more readable format, including the lie reproduced below in larger print. that two years of savings predating the program should be attibuted to the program. 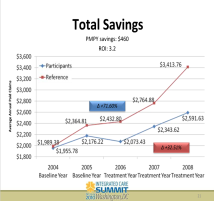 Obviously, if the program didn’t start for 2 years after separating the participants and the non-participants, they can’t claim savings for the participants before there was even a program to participate in. Citing savings from nonexistent programs is a wellness industry tradition, starting with Safeway’s program. That was the one which formed the basis for the Affordable Care Act’s wellness incentive.

So every penny of alleged savings prior to 2006 was due to the study design rather than the program itself.  It subsequently turned out that comparing participants to non-participants was completely invalid. I proved it using the wellness industry’s own data, and then two randomized control trials showed the exact same thing. Zero risk reduction attributable to the intervention.

So what did Ron do when it was pointed out that you can’t claim savings for a program that doesn’t exist?  Nothing, at first. Then The Incidental Economist (TIE) got wind of Ron’s analysis and called it, to use their technical term, “crap.”

TIE is widely read, so Ron had to do something. Ron’s response was to call the graph “unfortunately mislabeled, using the passive voice, as though the graph reproduced itself.

He then doctored it, whiting out the labels altogether, yielding this rather sparse x-axis.

He then duly published an “erratum” — that’s Goetzel-speak for admitting you got caught — in the Koop Award application: Ron is affectionately known as “Goetzel the Pretzel” for the prowess he has achieved, honed by years of experience, in making lies sound like innocent mistakes, or “errata.” This one is a screenshot as it appears today on the site, and I just emailed it to myself so Ron, don’t even think of “disappearing” the evidence, as is your wont…

Hmmm…nothing in the active voice about who was responsible for this “mistake.”  Perhaps the erratum just wrote itself.

And that brings us to Ron’s most recent sleight-of-hand, which is why a 10-year-old slide is back in the news. He recently re-doctored the original doctored savings slide, which now once again resides on the Koop Award website, along with the aforementioned “erratum” which he forgot to delete when he replaced the original phony savings slide with the doctored version of the phony savings slide (which is apparently now also compliant with “HIPPA”).  Try reading that again — tough to keep up with all the deception.

Hmm…looks like the erratum needs an erratum because the original X-axis is back. 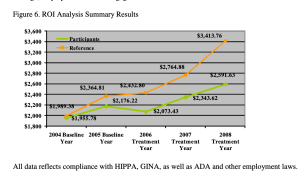 Why did he recently re-post the original slide? One of two reasons:

Either way, we look forward to hearing Ron’s rebuttal. After all, this blog posting isn’t going to rebut itself.

By whynobodybelievesthenumbers in Uncategorized on September 18, 2020.
← What a smoky bar teaches about COVID transmission Busted! Another mistake found in my analysis →