Tag Archives: the price we pay

Review of The Price We Pay, by Dr. Marty Makary 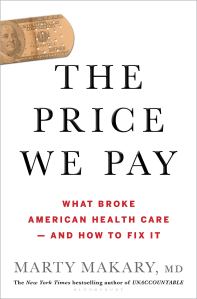 Aside from the many antediluvian wellness promoters still insisting that the country’s healthcare cost crisis can be solved by browbeating employees into pretending to eat more broccoli, there is a legitimate debate between:

The Price We Pay – certain to be a New York Times bestseller like Dr. Makary’s Unaccountable—shows quite definitively that the answer is both. Our focus in TSW is largely on the wellness industry’s stock-in-trade (I’m looking at you, Interactive Health) — hyperdiagnosis and overtreatment:

“If overtreatment were a disease, it would rank as one of our leading public health threats.”

There is precisely one vendor combating overtreatment at the employee level, of course…and so it’s no surprise that Quizzify gets a nice shout-out. It’s one of only 3 employee health services vendors, out of thousands, mentioned positively. And our work at TSW is recognized too. Here is a brief excerpt of the shout-out:

Al Lewis went from a wellness industry advocate to its foremost critic. He spent years in the industry but came to see its futility. He left and started his own company, Quizzify. The company educates employees about overtreatment and dispels myths about healthy living. I traveled to meet with Lewis, and he didn’t hold back.

“Most of it is fluff. And I might add expensive fluff,” Lewis, a tall man beaming with a smile, explained to me over a snack after he had just finished speaking to a large audience. Quizzify uses an interactive game show approach to teach people about common medical pitfalls, including the risks of overscreening. It also alerts employees to the most common unnecessary tests and procedures in medicine today, according to the Choosing Wisely campaign.

Painstakingly researched with a team of dedicated and highly skilled students and fellows, Dr. Makary traveled around the country collecting first-hand stories at an on-the-ground level rarely seen in health services research.

Dr. Makary has created a niche as a practicing surgeon who also does on-the-ground-research and who also influences health policy. No one else does all three and only few people, like Atul Gawande, do even two of those three. Hence these are not just stories for their own sake, but they feed into the national debate. With the help of this group to raise awareness, they could win the national debate.

One such set of stories, about hospitals suing patients for unpaid bills as a matter of course, has already been featured on NPR, and the hospital in question, Mary Washington in Virginia, has already agreed to cease and desist.

In another city — Carlsbad, New Mexico — it appears that a very significant portion of all the households had been sued by the city’s hospital.  This particular chapter reads like fiction. To parse it in detail to the slam-bang climax would require a spoiler alert. Suffice it to say that after you read it, you will want to sell short the corporation that owns the city’s hospital. Except that the corporation in question – notorious among healthcare industry insiders for having made one of the worst acquisitions in hospital industry history earlier in this decade – is already near bankruptcy. The strategy of suing patients is a last-ditch attempt to prevent it. Not much left to short.

Many hospitals sue patients, as we learn in this book. But it’s not just the hospitals. Turns out there are even worse offenders: ambulances. Air ambulances are the worst of the worst, with one example of a bill for an air ambulance ride that exceed the actual bill from the hospital for a one-week stay.

These companies’ strategies are driven by greed rather than need, it would appear, seeking out patients not with the greatest gaps in care or health disparities but with the greatest ability to pay, which explains why 24 air ambulance companies operate in Dallas vs. none in the Medicaid-intensive Rio Grande Valley.

The bottom line is that surprise billing is way worse than I thought…and I thought it was pretty bad.  Fortunately, the book recommends some ways to mitigate it.

Inspired by this book, I’ve created a solution, which is that the health insurance card should carry a “battlefield consent” to treatment in the ER and an agreement to be responsible for reasonable charges not to exceed X times Medicare. ERs have to treat you, if you come in. That’s the law. You just don’t have to agree to open-ended charges by signing their preprinted ‘terms and conditions.’ Absent this Battlefield Consent card, you’d either be exposed to open-ended billing or have to negotiate on the spot. Good luck with that. A health insurance card like this would create the equivalent of an advance directive for ER billing.

And what would a thoughtful healthcare policy book be without dissing wellness?

Here’s a shocker:  Quite ironically considering that he works at the same institution as Ron Goetzel, Dr. Makary hates “pry, poke and prod” wellness programs. (Johns Hopkins’ excellent wellness program excludes them.) The ‘screening-industrial complex,’ he calls it. Which indeed it is. What, he asks, is so difficult about screening according to USPSTF guidelines — other than depriving wellness vendors of valuable revenues drained from employer coffers? Vendor coaching doesn’t come off much better:

A friend invited me to sit in on a company’s wellness class. I can sum up the instructor’s message in three words: “Avoid fatty foods.” There are a few problems with that message. First, it was about the only thing the health “coach” said to the 20 or so bored people in the room. But second, I cringed because it has absolutely no scientific basis. This class risked making people less healthy; it was loaded with misinformation.

The Price We Pay is already close enough to the top of the Amazon rankings that we can nudge it onto the NYT bestseller list. Every member of TSW Nation should be buying a copy, reviewing it on Amazon, and circulating the reviews loudly on social media.